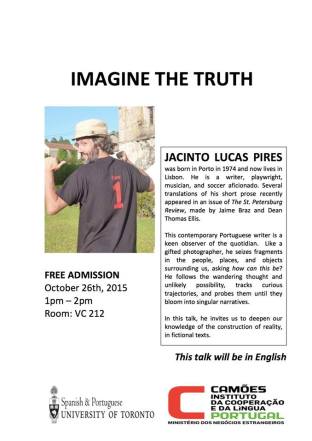 Jacinto Lucas Pires was born in Porto in 1974 and now lives in Lisbon. He is a writer, playwright, musician, and soccer aficionado. Several translations of his short prose recently appeared in an issue of The St. Petersburg Review, made by Jaime Braz and Dean Thomas Ellis.

This contemporary Portuguese writer is a keen observer of the quotidian. Like a gifted photographer, he seizes fragments in the people, places, and objects surrounding us, asking how can this be? He follows the wandering thought and unlikely possibility, tracks curious trajectories, and probes them until they bloom into singular narratives.

In this talk, he invites us to deepen our knowledge of the construction of reality, in fictional texts.